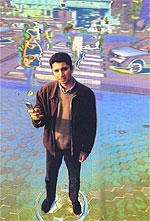 Look out! Neeraj Jhanji wants to know who you are and where you’re going

Japan is a relationship-driven country and not only for securing company contracts. Who you know and how well you keep in touch with them drives social and business interaction on every level. Wireless technology has been the answer to Japan’s social networking imperative and a swift new communications platform, ImaHima, is making Japanese networking faster and easier than ever before.

Ironically it was not a local who launched the hot new technology, but a 28-year-old Indian, Neeraj Jhanji. The multi-lingual Jhanji, fluent in English, Hindi and Japanese, holds an undergraduate degree in electrical engineering from the University of Delhi and won a Fujitsu Asia-Pacific MBA scholarship.

Before hitting the entrepreneurial trail, Jhanji worked in technical and consulting roles for Siemens and Unisys and was a senior consultant in e-commerce strategy for Andersen Consulting in Tokyo. Together with his partner and vice president of technology and operations, Yoshiatsu Kitagawa, Jhanji has big plans for his fledgling business.

ImaHima, which translates as “are you free?”, allows mobile Net-phone users to send email simultaneously to everyone on their list or to leave messages on their member file so friends or business associates in their group can coordinate schedules.

In Shibuya and want to meet friends for dinner? ImaHima lets them know where you are and when to meet. Lonely in Ginza? Check ImaHima and see if any of your buddies or associates have left a note that they are passing through the same area. Value propositions to businesses include wireless advertising and opt-in sites for updates on dining, shopping, coupons and special offers, giving business clients access to real-time, highly-segmented area marketing.

Jhanji is planning to launch an even more user-friendly version of ImaHima 2 this April and he will be backed up by the installation of new technology architecture capable of handling the higher levels of traffic the company expects.

Launched on December 15, 1999, the ImaHima website is currently getting close to an average 800,000 hits a day, with 50% of its 200,000 registered users coming back within a week. With an average age of 25 and a female-male ratio of 1:3, the site is right on the demographic target for avid young Japanese Net-phone users. ImaHima is working with Japanese telecom carrier KDDI and plans to be included in the chosen few for Japan’s hottest wireless listing – NTT DoCoMo’s i-Mode official content sites.

ImaHima recently completed first-round funding and Asian Business caught up with the company’s young CEO in his new high-rise office in the fashionable shopping and business district of Ebisu, Tokyo.

AB: Tech stocks are down, venture capital is getting tighter, how difficult was it to interest investors in ImaHima and its communications technology? 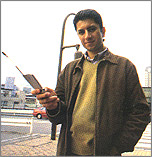 JHANJI: We started looking seriously at funding from May and closed in December. It took longer than we initially planned due to the crash in tech stocks last March. VC [venture capitalist] investors needed time to recover and plan ahead. After the crash, the media was looking at wireless technologies as “the next big thing”.

Because ImaHima’s technology and concept bridges both communications and the Internet, we found ourselves in a much stronger position in regards to investor interest than a dot com, especially in regards to global companies. The market reaction was very positive to us.

AB: Although the news is still confidential, I gather your first investors are largely foreign capital companies in Japan. Were they looking for a venue through which they could catch the wireless wave?

JHANJI: Actually, it was a conscious choice on our part. In general, Japanese companies do not have that much experience in venture capital. It’s easier and faster to work largely with foreign-based investors.

For example, given their lack of experience, Japanese VCs do not typically understand the concept of common shares and preferred shares — for them it all has to be common shares. If your company then tries to bring in a foreign investor, that investor will insist on preferred shares. It’s very difficult to mix the two.

If your venture sides with a Japanese VC, then you need to keep the investors Japanese. Japanese investors also are not comfortable with the high valuations common to high-tech firms, nor are they able to reach decisions quickly. Foreign investors, VCs, know what to look for right away: what stage of business evolution is the company in; what’s the team’s background and strengths; what kind of contracts does the company have; what kind of users, revenues and future plans. Since we were able to get a positive response from the foreign market, we focused on them. But yes, being a wireless Internet company did help.

AB: Was the technology difficult for your investors to grasp at first?

JHANJI: The strong part of what we’re doing is the concept rather than the technology. The core concept is “where are you now?” (ImaDoko?). Keeping in touch with people is central to what mobile phones are all about, especially with the pace of life in the city and everyone on the move all the time. When I first came up with the basic idea for ImaHima, I thought, “what if a company knew where mobile phone users were?” It could sell that information to marketers who, with permission from these people, would then market coupons or value added services through an intercommunication tool. I also thought the company could generate revenue by charging a subscription fee to the end user through the phone bill. To my surprise I found no one else was doing it. I patented the technology and the concept sold itself.

AB: Now that you have your funding, will you be focusing more on expanding and refining services for your subscriber base or sales for location-based advertising?

JHANJI: Location-based advertising is very new to everyone in this market. Although awareness is growing, consumers aren’t yet focused on it. Some do promotions work in this venue and some don’t, depending on the product.

Why something didn’t work can be difficult to explain to clients. Because it’s so new, the sales end of location-based ads is a very labour-intensive process.

Right now we don’t have the manpower to make the advertising side profitable. It’s a niche, but it’s not a money-spinner. We’ve decided that our revenue model will continue to be subscription fee based with some merchant advertising.

That said, we will continue to spend time educating not only customers but also client firms, getting merchants warmed up to the concept and used to these new techniques.

AB: You can’t run a wireless business without the question of DoCoMo coming up. How does iMode relate to your business model?

JHANJI: When I was finally ready to show ImaHima to the world, I called DoCoMo right away and said: “I have a product that will make you money.”

AB: Were they excited

JHANJI: They loved it! But they said it was too early in the evolution of their wireless model to use it yet. If you look at what iMode has been doing, it’s really quite primitive. Instead of community-based services, they sell chunks of content delivery, like magazine subscriptions.

As a communication enabler, providing community-based services should be one of DoCoMo’s main efforts. One problem is they are such a powerful brand that they worry over their image. Community or chat sites have often been corrupted for enjokosai, or prostitution services. The potential for misuse has made them wary.

At ImaHima, we have had public channels as well as private ones, and that’s where I met my roadblock in getting included on their official contents list.

However, we were first to market, we had a very good name and a cool concept, and we got noticed in a lot of media, the Wall Street Journal, and European and Japanese media from television to magazines and newspapers. Because of the publicity, our users grew to 200,000 within a year with no advertising expenditures on our part.

We listed with Japanese telecom group KDDI and DoCoMo started sitting up and taking notice, saying “they’re not getting any help from us, but they’ve got more page views a day than most of our official sites”. In our new ImaHima2 redesign, we have decided to eliminate the public channels. DoCoMo has become more receptive; we’ve received verbal approval and are awaiting a written contract.

AB: What part in ImaHima’s game plan does your partner Yoshiatsu Kitagawa play?

JHANJI: I put ImaHima up on the web in December 1999 and Yoshiatsu came in March of this year. I’d known him for five years from my first days at Andersen when I was just an intern.

He has a lot of technical expertise to bring to the equation and a background in project management, which is essential. I’m not a hard-core developer anymore, having him there gave me the freedom to concentrate on growing the business.

AB: And is it growing?

JHANJI: There are doors opening up for ImaHima outside of Japan. We have had conversations in Europe and other major telecoms in Asia about bringing the service there. It’s a scalable model. Our investors have given us the funding we need to build on our success and go global.