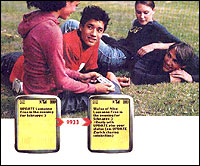 Where are your friends right now?

Locate your friends and find people with common interests using your handy!

ImaHima is a service imported from Japan that should make this possible in Switzerland.

An Indian guy living in Tokyo has just been dumped by his girlfriend. He asks himself, “I wonder which of my friends are hanging out somewhere nearby.” And he starts to think of ways to find new friends.

Neeraj Jhanji (that’s the name of the poor guy in our story) was thinking one step ahead of the rest of the bunch back in 1999. This is when he started developing his iMode Service – imaHima. With this service, mobile users can exchange information about their actual location and their actual availability.

In Japanese, “imaHima” means “Are you free now?” More than half a million people use imaHima in Japan – and the numbers are still growing. So Mr. Jhanji has become quite in demand! imaHima is available on all of the big Japanese mobile operator networks and AOL is the company’s main investor.

Are You Free Now?
imaHima has been up and running for a few weeks now in Switzerland. Luckily no attempt has been made to translate “imaHima” into Swiss German – in cases such as this, some technical and cultural adaptation is always necessary. In Japan, imaHima is running mainly on iMode, but also on WAP and preparations are currently being made for FOMA, the first UMTS network.

To achieve a sufficient base of customers here, it was necessary to adapt imaHima to GSM and allow messages to be transferred via SMS. The dimensions of big urban areas in Japan are of a much larger scale than in Switzerland. That’s why, localization played a much more important role in Japan than it does here. Swiss imaHima users just manually enter their location – the city or place actually occupied. It seems that this is enough for spontaneous meetings.

The Swiss service differs from the Japanese Service in terms of features as well, because in Switzerland much more focus is given to sub-communities: people of common interests (called “clubs” in imaHima terminology.) It is assumed, that people will use the service with their existing friends in addition to finding new ones – but this is in the end still an open question and not predictable in such an early phase.

Relatively Simple and Useful
Anybody who has a mobile phone that can send SMS can be “imaHima.” Registration can be done either via SMS or via the imaHima WEB page. During registration, everybody must select a nickname and can remain anonymous if need be.

In the beginning, you should ask some of your friends to register as well so that you can have a base of acquaintances to start with. Once registered, you can create your own buddy list or join one of the clubs (TV, Dating, Fitness, Hockey etc.). Some of the clubs are operated together with third parties, which deliver content and information.

Using imaHima via short SMS commands is relatively easy and straightforward. An SMS containing: “ADD Michi” sent to the imaHima short ID 9933 will add Michi to your buddy list. With “SEND BUDDIES hey let’s go to the cinema” you can invite all the friends on your buddy list to go to the cinema tonight. Such “broadcast messaging” (one command send to multiple recipients) isn’t possible with the built-in functions on existing handsets so far. This is one of the big advantages of imaHima. It’s a pity that presently only one buddy list can be created, because it would be much more convenient to have different buddy lists for different types of buddies (friends, family, colleagues etc.)

Anyone who has you on his or her buddy list can provide you with an automatic inquiry by sending “UPDATE zuri who wants to have pizza?” In addition other imaHima users sending “FIND zuri pizza” can perform a key word search on people doing things related to pizza. So the door is open for anonymous chats.

The pricing system is a little tricky. In general users who “order” anything will be charged. ADD costs 19 Rappen, SEND BUDDIES costs 19 Rappen * the number of users on your buddy list. UPDATE costs 19 Rappen for you and 19 Rappen for everybody who wants to receive your notification. A single SMS costs less than a standard SMS via the mobile operator (still, 60% of revenues go into the pocket of the operator.)

When somebody uses the service it’s instantly reflected on the monthly bill! Young people, whose telephone bills are paid by their parents, could potentially love imaHima, and soon a prepaid solution will be offered. In addition, the buddylist is restricted to 10 buddies.

If the Swiss audience reacts similarly to imaHima as the Japanese did, than there should be adoption within the next 24 months achieving roughly 25,000 customers. In the first months the target is to attract a few thousand people to the service.